The Zebulon Pike Chapter has placed six historical markers throughout Southern Colorado. The markers vary in representation from the founding of the cities, protection for the local citizens, and marking trails used by Native Americans and the Western Expansion. The markers were placed starting in 1895 through 1983. 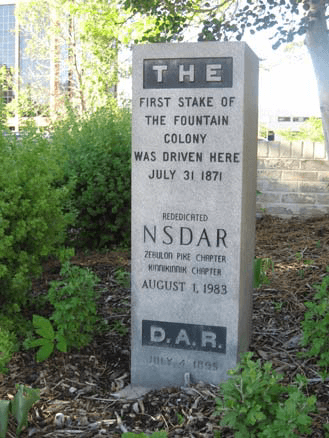 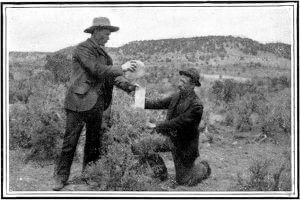 This marker signifies the exact location on which Colorado Springs was founded on July 31, 1871. Ironically, the founder of the town was not present that day, but away in the east on railroad business. Instead, a handful of his colleagues placed the first physical stake for the community he dreamed up.

General William J. Palmer, then managing director and superintendent of the Kansas Pacific Railroad, first saw the area in 1869, and determined that it was, "...the most attractive place for homes in the West, a place for schools, colleges, science, first class newspapers, and everything that the above implies."

In March of 1870, General Palmer organized the Denver and Rio Grande Company to build a railroad from Denver south to Mexico. In the fall of that year, the railroad purchased 9312.27 acres of land at the site for about $10,000. 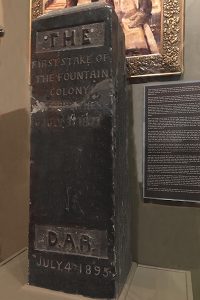 Twenty-four years later nearly to the day, the Zebulon Pike Chapter marked the exact spot where the first stake of the Fountain Colony was driven. The event included speeches, patriotic music, and an announcement that General William Jackson Palmer had personally certified the stake's location himself. John Potter, who helped to drive the first stake in 1871, ceremoniously raised the American flag above the marker.

A written description of the ceremony in the 1895 Zebulon Pike scrapbook provides a few details of the event, "The Z. P. Chapter of the D. A. R. marked the spot where the first stake of the Fountain Colony was driven... The morning of July fourth dawned bright and beautiful. At an early hour eager children thronged the porches of the Antlers Hotel awaiting the members of Daughters of the American Revolution, to assist in the exercises of the Zebulon Pike Chapter of this city. The locality to be marked by the chapter was the corner of Pikes Peak and Cascade Avenues (S.E.) southeast."

A replica marker, rededicated August 3, 1983, now stands at the southeast corner of Cascade and Pikes Peak Avenue. The original marker, pictured on the right, is now located in the Colorado Springs Pioneer Museum.

We are not makers of history,
We are made by history Martin Luther King 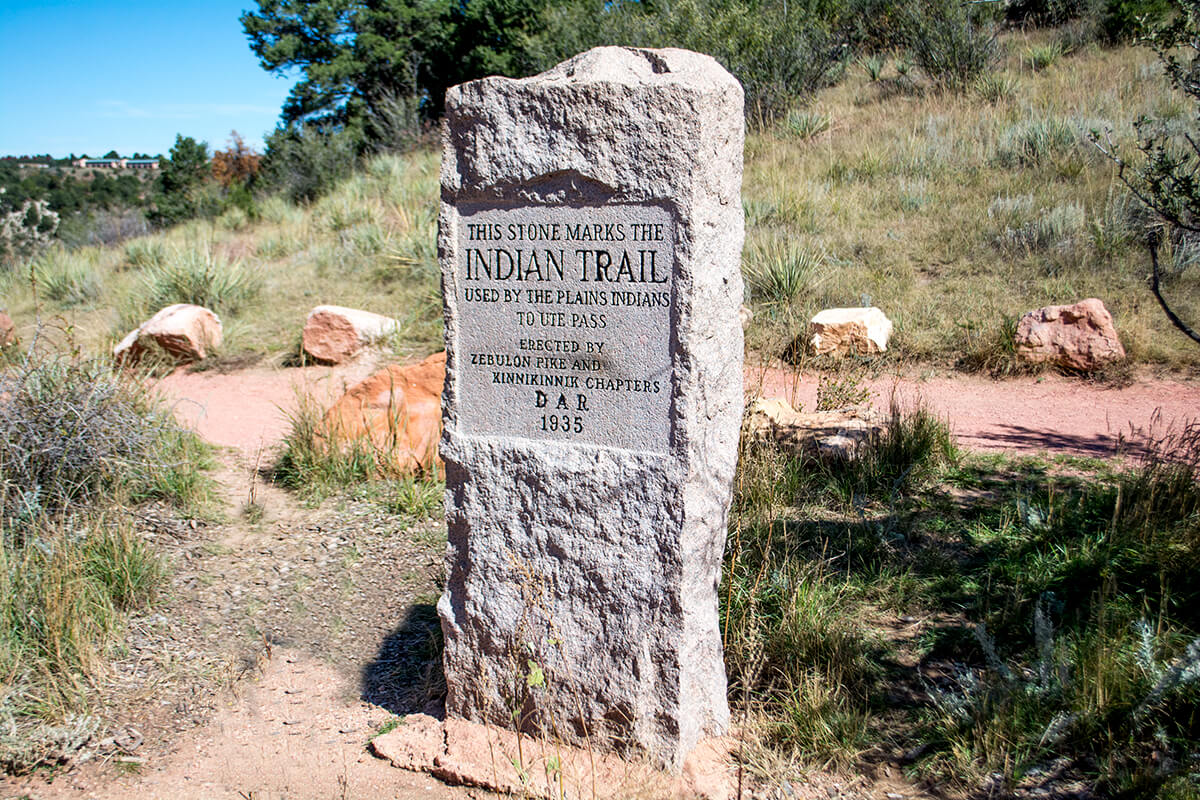 This stone marks the Indian Trail used by the Plains Indians to Ute Pass. The Ute Trail extended from the plains of Colorado to Utah, its eastern reach being the forerunner of US-24 west from Colorado Springs. Before the time of the white man, it had been used for many years by some bands of the Ute Indians in their annual trip from their homelands in central and western Colorado to the springs at Manitou, and in their forays into plains country to fight with their enemies or to hunt. 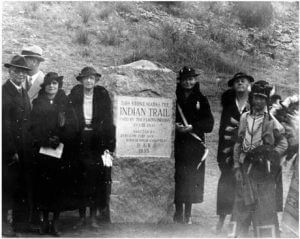 As the white man began moving westward in the 19th century, explorers, trappers, prospectors and cowboys began using the trail. Major Stephen Harriman Long’s expedition of 1820 made note of it. Kit Carson traveled it to trap beaver in South Park. The journals of John Charles Fremont speak of it.

The 1859 gold rush saw the beginning of extensive use of the trail for freighting supplies to the gold fields and bringing out gold ore. Its use dwindled after 1872 when a new wagon road was built following Fountain Creek (Fontaine qui Bouille). The Colorado Midland Railroad in the 1870's built its line upward and westward following closely the wagon road, not only serving the gold fields, but enabling the development of a great recreation area.

The monument was erected and dedicated on November 25, 1935 by the Zebulon Pike and Kinnikinnik Chapters. Photographer was Horace S. Poley and the people attending included William W. Postlewaithe and Susan T. Dunbar.

We can not escape history Abraham Lincoln 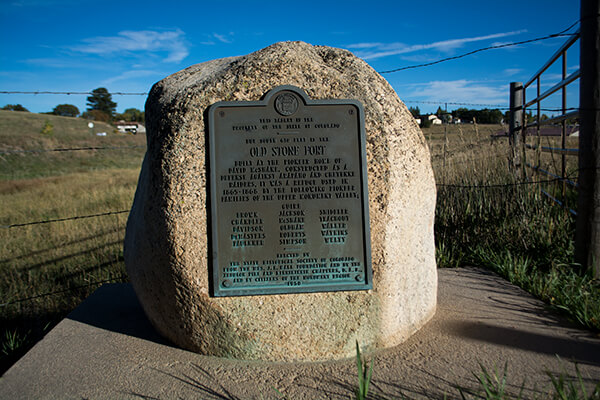 The Old Stone Fort was built at the pioneer home of David McShane, constructed as a defense against Arapahoe and Cheyenne raiders. It was used in 1865 to 1868 as a refuge by the following pioneer families: The Guires, Browns, Jacksons, Shielders, Chandlers, McShanes, Oldhams, Teachouts, Davidsons, Walkers, Demasters, Roberts, Watkins, Faulkners, Simpsons and Weltys. 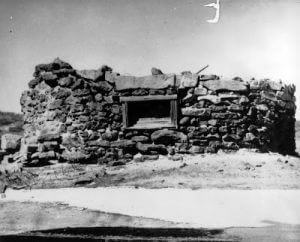 A circular stone fort was built on the McShane ranch. It was twelve feet in diameter with stonewalls two feet thick and a roof of logs. Earth covered the logs to prevent the Indians from setting the roof on fire. There were five portholes of which four of them had sliding blocks of stone to close them. The fifth porthole was really a window. It gave the only light and faced the McShane house. From this porthole the families could see if any Indians were creeping up on the house. An underground passage led from the house to the fort.

In February of 1950, the Zebulon Pike and Kinnickinnik Chapters of the Daughters of the American Revolution dedicated a historical marker on Highway 105 between Monument and Palmer Lake. The fort lies 610 feet to the south.

Our Colorado Santa Fe Trail DAR markers began conception in 1906 and were completed in 1912 with the last one unveiled at Bent's Old Fort. A committee consisting of one member from each chapter in the state was called upon to ask the legislature for $2,000 to aid in the project. State Legislature appropriated the $2,000 as requested and upon completion, the Colorado Daughters returned $600. Twenty seven stones were set with funds furnished by the state of Colorado, the Santa Fe Railroad, the Denver and Rio Grande Railroad; the city council of Trinidad gave $500, and many citizens along the route contributed.

While the Kansas Daughters placed markers every two miles, the Colorado Daughters choose to place markers every 5 miles. Stratton, Lowery & Ellis quarries in Salida, CO proudly provided most of the markers. The Salida Mail on December 2, 1910 said, " It is quite a victory for Salida and that her granite has been chosen when all other granites of the world were on exhibition for selection for the markers of this trail."

There are now thirty-six of these historic granite stone markers on the actual route that the wagons traveled on the Santa Fe Trail in Colorado. The Zebulon Pike Chapter is solely responsible for placement of three markers in the eastern most parts of the trail. 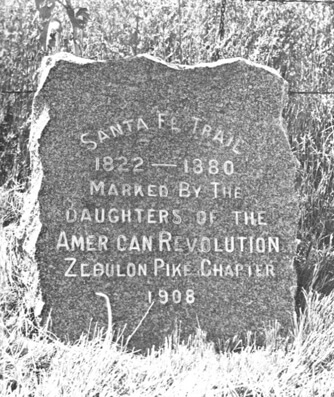 Amity Marker claims to be on top of the Santa Fe trail. It is in a ditch east of the entrance to Jensen Farm office at Rd. 30.5. It is difficult to spot being sometimes smothered by weeds.

The area also marks the general area of the Salvation Army's Amity Colony also known as Fort Amity. The Amity colonization project took urban working poor people, relocated them to rural areas and allowed them to become productive agriculturalists. The Amity Colony was on 1830 acres of land and in 1904 had around fifty to sixty families. The colony was in existance from 1898 until 1909.

A page of history is a pound of logic Oliver Wendell Holmes, Jr 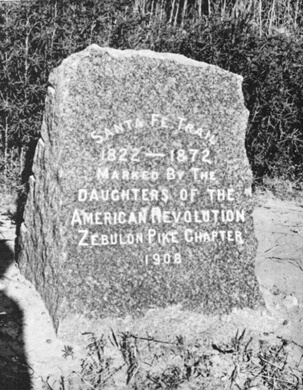 The inscription on the marker reads, "Santa Fe Trail 1822-1872, Marked By The Daughters Of The American Revolution Zebulon Pike Chapter 1908."

If you want to understand today,you have to search yesterday Pearl S. Buck 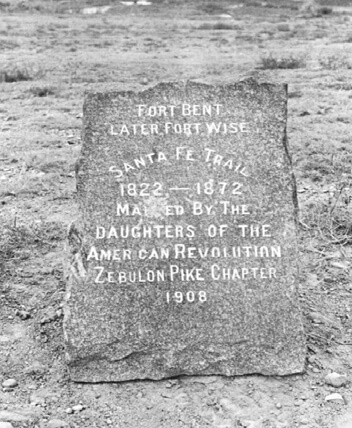 William Bent moved to New Bent Fort in 1852 after moving his gear out in 20 wagons and blowing up the first Bent's Fort. Thirty miles to the east and on a bluff overlooking the Arkansas River, he built a smaller version of his adobe establishment. It stood on a point so that it could be approached only from the north. The 16-foot-high stone walls surrounded a dozen rooms and a large central court. A 55-foot-long warehouse was inside. Although it had no bastions, it retained the cannons of the earlier fort, and these were mounted on the corners of the roof.

In 1859, the Army moved in nearby, and by 1860, Bent's New Fort became an Army outpost. The Army first re-named the place to Fort Faunterloy, after a Dragoon officer, then Fort Wise, after the governor of Virginia. It used the stone stockade principally as a commissary and quartermaster storehouse. The center of Fort Wise was built by Sedgwick's 350 men on the low ground next to the Arkansas.

The Zebulon Pike Chapter dedicated this marker in 1908, and a few stones from the foundation can be found nearby.